I’ve written about Scrivener before, but I’ve been spending a lot of time with it lately so I thought I’d give some brief thoughts on using it as I impatiently await the long-sought iOS version.

First, Scrivener remains to be one of the most powerful pieces of software I’ve ever used. Calling it a Swiss-Army Knife is actually an understatement. Scrivener is able to curate research, serve as an elegant writing platform, and even as an eBook creator. There are so many tools in this application that I’ve barely cracked it’s potential.

Scrivener, however, is far from easy. My transition into it’s workflow was easier than most folks I know because I’ve broken up my documents utilizing styles for years. The idea that a second level heading is really the second level of an outline is second nature to me, and this translated well into the model of different document levels in the binder. For folks who might expect Scrivener to simply act like a word processor, however, the transition can be quite difficult. Unlike word processors, which will get out of a user’s way when they want to use the application as though it were a typewriter 1, Scrivener refuses to bow to this impulse. In fact, the more you want to use Scrivener like a typewriter, the less you will appreciate it. For Scrivener to really work, every distinct idea – whether it be a chapter, section, or sub-section – should be it’s own document. This way the larger project has a built-in structure.

This often trips up people not used to this idea. They become confused switching their eyes back and forth from the binder to the editor, trying to remember what section they are dealing with. When the document outline is set before writing begins, it’s especially troublesome to remember what comes next. I solve this problem in two steps. First, I set the editor to display in “Scrivenings.” That is, all the documents beneath the selected layer will display as a single document in the editor. This is reflected in the editor window as depicted below.

Next, I go to Format ==> Options ==> Show Titles in Scrivenings. As the command suggests, document titles will be viewable in the editor when “Scrivenings” is selected as the view mode. This also works in Scrivener’s excellent composition mode, allowing for distraction free writing while still providing cues as to what comes next in the project. Once the titles are enabled, Scrivenings view looks like the picture below. 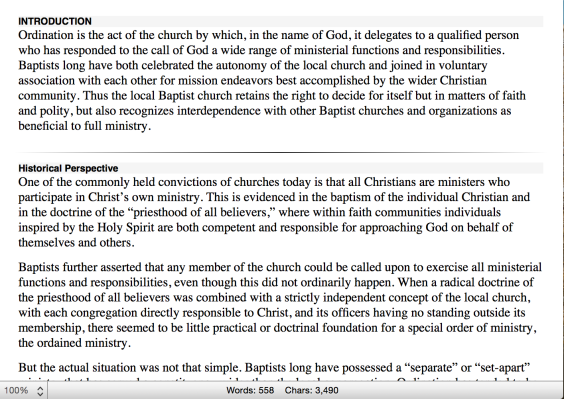 This simple trick can make the transition to Scrivener much easier, but will make it more productive even for experienced users.