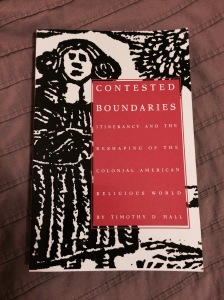 Contested Boundaries deals with First Great Awakening by exploring both the impact and causes which lead to the great itinerancy movement in the 1740’s and onward. Timothy D. Hall paints a fascinating picture of a world suddenly more “connected” than it had ever been previously. This trans-Atlantic world suddenly made people feel as though they were part of a larger world, where styles and products from England reached around the Empire. Hall convincingly argues that this economic expansion, as much as any temporal reality, lent itself to the success of the itinerant movement. As the world shrunk, the old notion of “parish lines,” set in stone in both New England and Virginia but approximated in various forms elsewhere in the colonies, inevitably collapsed. The notion of “choice,” in the form of English products and styles, began to shape people’s world-view. When itinerants began their tours, seeking to win the lost even in “settled” realms, that notion of choice inevitably transferred over to religion as well. It is a fascinating view, especially as it seems to echo what the church is living through in the current age.

I am most appreciative of this book, however, in that it shows how the people involved in the debate were not “good guys” and “bad guys” the way so much of the narrative of the Great Awakening is depicted 1. In fact, while the “new lights” are championed by many settled pastors as the “good guys” today, I’m not certain present-day settled pastors would have been on the “same immediate team 2” back in the 1740’s. I say this because much of the logic used by the “old lights” to refute the itinerants in their day is frequently echoed by present-day settled pastors when they speak about mega-churches, regional congregations, or even radio or TV preachers. The idea a “stranger” would dare to come to “their flock” and instantly have more credibility than them often leaves settled pastors fuming. The reality is, there were some horrible people attacking itinerancy and a number obnoxious people championing it’s virtues. The idea of “good guys ‘all in’ for the itinerants” and “bad guys who didn’t care about the Spirit’s movement” is a terrible picture of the conversation surrounding the First Great Awakening. The majority of people were simply trying their best to honor the call of Jesus, and just about everyone got part of their interpretation of the events wrong. The collapse of parish boundaries did not doom religion and order. The revivals were not the beginning of Millennial peace. Despite the attacks which sprang from some itinerants, some critics of the revivals were actually converted.

It’s always interesting to see events which we paint in black and white as more complex realities, and Timothy D. Hall has done a good job opening his readers to a fascinatingly complex world.