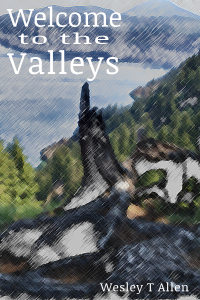 “Please, sir, continue,” encouraged Satal. Her gaze fell down up on Walter from the presidential lectern and a recognition passed between the two politicians. What Walter was about to present would alter the very boundaries of The Valleys, and further muttered comments would not be welcome*.

“Ah, yes Madam President,” replied Walter with a slight nod. “As you know, for many years the people of the Coastlands have brought petitions to the Senate requesting the road network be extended out to our settlements.”

“And for as many years, this body has indicated the Coastlands are not under the jurisdiction of this body and are, in fact, breaking our customs by moving beyond the reach of the roads.”

Once more, Walter nodded. “Yes, Madam President, that is true. But the situation regarding the status of the Coastlands has changed somewhat as of late. Indeed,” Walter now turned to face the assembled Senators. “It is precisely these changed circumstances which has brought me before this August body today.”

“The Old Fox hasn’t lost his tongue, that much is certain,” voiced someone seated near Jeremy. Several muffled snickers responded to the comment and Jeremy felt his ears grow read. Walter continued, unaware of the comments.

“Our change in circumstances leads me to make a request far more bold than those previously set before the Senate. It is with the blessing of our council of settlements I come here this morning to formally petition for inclusion into The Valleys.”

With this the gathered Senators and Representatives broke into various shouts of surprise, exasperation, and cheers. The formerly attentive audience descended into dozens of conversations and arguments as the politicians began to work though the implications of Walter’s request. The public gallery had likewise fallen into a pool of heated conversations. Jeremy glanced toward Ama and was surprised to discover the healer sitting with her eyes closed, shaking her head slowly. The presidential aids, however, shared no reaction of great significance. Some wore quietly stunned expressions, and others smirked knowingly, but no sound was uttered from that quarter of the room.

Satal began banging her anvil against her lectern almost immediately after the Senate Chamber erupted into chaos shouting, “Order! Order! We will have order here!” For several moments no one seemed to pay the President any attention, but then suddenly the room became quiet and almost unnaturally still.

“Four minutes, thirty-six seconds,” whispered the same voice Jeremy had heard earlier. “That’s the fastest she’s gotten them to settle down in weeks.”

“There is a Petition which has been brought before this body by an settlement recognized as independent of The Valleys. Highcliff of the Coastlands desires to come under our rule and we will discuss this as leaders and not as an unruly mob. Now, what discussion?” A hand raised in the back and Satal pointed to a tall gentleman wearing a sky-blue tunic and green slacks. “Senator Sillen of Bayview, please speak.”

“Madam President,” replied the man in a high, melodic voice. “While we have, indeed, recognized Highcliff as being outside our jurisdiction I must point out that should the settlement and environs be incorporated into our boundaries they most assuredly would fall under our laws. That would include laws regarding the support of a Senator for this body. Would this not be so?

“It would indeed Senator,” agreed the President.

“Then forgive me, I fail to understand the logic of Walter’s request. To the best of my knowledge the region of the Coastlands is exceedingly poor in both monetary wealth and natural resources. I see no way they would be able to support a full time representative to this body.”

Looking directly at Walter, Sillen continued, “Old Fox, do you mean to say the people of your adopted home are willing to take a lesser status in order to be joined to The Valleys?”

Walter bowed to Sillen before responding. “No, Senator, we would not be willing to sacrifice our status as full settlement in order to fall under the umbrella of this body and its laws. We will join as equals, or not at all.”

“Again, my pardon, but how is Highcliff expecting to find the wealth needed to support a Senator here in The Ravine? This seems to be beyond its current means.”

“Previously, Senator, that would have indeed been the case. But, as I’ve said, our circumstances have recently changed.” With that, Walter reached into his satchel. Pulling out his hand he was found to be holding a deep black rock which, somehow, seemed to be on fire. Streaks of light pulsed through veins on the ore’s surface as Walter held it up above his head for all to see. The entire chamber fell silent as Walter rotated his body in place, allowing all those gathered to view his shocking revelation.

“That’s not possible,” exclaimed the same voice which had been buzzing in Jeremy’s ears ever since Walter’s testimony had begun.

“Oh but it is possible! Six months ago miners found, one of our deepest shafts, a seam of evercoal.”

“But it’s never been found outside the Inner Valleys!” Challenged a voice from the Representative side of the hall, leading Satal to bang her gavel for order once more.

“That is true, and yet, this ore came from a mine not three miles from Highcliff.”

Satal nodded. “Senator Merkot is recognized for a point of challenge.”

“Thank you, Madam. Walter Old Fox claims this ore came from a mine near Highcliff, but how can we know this is true? Up until now this precious ore has been found no where else in The Valleys but in the mines surrounding our inner-most settlements. I find it… unusual… a vein of our most precious material would be found where there were no previous sings of its existence.”

“Are you calling me a liar, Senator?” growled Walter.

“Far be it from me to call the Old Fox of the Senate anything of the sort! I merely suggest the origin of the stone was not as Highcliff has led you to believe. Desperate people will sometimes stretch the truth in order to find a resolution for their desperation, after all.”

“In this case, Senator, this is not what is happening.” Walter reached into his satchel once more and pulled out a bound stack of papers. Offing it up to the president he spoke, “These are the mining records which have studied the seam in the six months following it’s discovery. In those pages, Madam President, you will find tonnage reports, dates of extractions, and a signed testimony by an Um healer regarding the size of the deposit.” Walter held up the pages, which were quickly gathered by an aide and deposited on her lectern.

“Very well,” replied Satal. “These papers will be put under guard and held in the committee chamber for seven days. Any Senator who wishes to study the documents for themselves will register with my office.”

“I’d like to continue my point of challenge, if you please?”

“Thank you, Madam President. As impressive as these records no doubt are, how can we be certain the ore Walter has produced is true evercoal? It could very well be falsebright, which is as wonderfully beautiful as it is worthless.”

Walter turned and grinned at Merkot, “I was hoping someone would ask that very question, Senator.” He reached into his bag a third time, and unveiled a brilliant pillar which cast a lovely honey glow over his testimony desk. “I know it is not falsebright because that ore, beautiful though it may be, is unable to be formed into evertorches.”

Walter set the evertorch on to his desk with a audible thud, it’s echoes were the only sounds moving into the utterly speechless chamber.