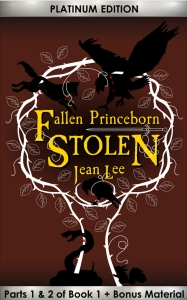 Last week I had the pleasure to read a novel written by an internet acquaintance of mine, Jean Lee. Readers of this blog might recognize Jean’s name from her comments, which come in on what I call “Jean Lee Mornings 1.” Jean is, by the way, a big reason why I decided to go ahead and publish In The Land Of The Penny Gnomes. It turns out she’s a pretty darn good fiction writer.

Fallen Princeborn is a combination of horror and portal fantasy. It’s set among a group of imprisoned fairy-like creatures known as Velidevour. The imprisoned creatures were simply unfortunate enough to be living at the location selected to be the prison for their resident “Princeborn,” and the wall put up to keep him in stopped up the creatures’ main source nourishment – which I don’t want to give away here. Suffice to say they’re starving, and a number of the prison residents have gone almost feral out of anger and starvation.

The protagonist of Princeborn is Charolette, a foul-mouthed eighteen year old who is a gifted pianist. Charolette’s also dealing with serious trauma in her past, and the authenticity with which she is written is one of the great strengths of the book. She has to answer questions inside herself about trust, the idea of home, and her relationship with her family. In order to mask her trauma Charolette does what many survivors do, she puts on a veil of strength and tries to shield others from the pain she experiences from the baggage she carries around. The way the extent of her traumatic experiences is revealed, through hints and brief glimpses into Charolette’s psyche, establishes her as a protagonist with some depth – even if there are moments when you want to scream at her to let go some of her pain and be healed.

Charolette also isn’t the only on in the prison who is dealing with the baggage of past trauma. Each character we meet during her excursion is dealing with some sort of past suffering. Rather than making these characters uniformly drab, however, the extent of the hidden wounds found among the imprisoned residents gives each a good palette from which to draw their character. The best fleshed-out of these is the Fallen Princeborn himself, Liam, whom readers get to know through some excursions into his inner monologue.

For me, the star of the book is the setting, the magical realm of River Vine. It’s old, and dangerous, and beautiful, and sad. It contains wonders which leave Charolette taken aback, and rot which is absolutely disturbing. The terrain is varied, and it’s big – far bigger than it should be, given the size of the wall which surrounds it 2. And, more importantly, it reminds me of one of my favorite childhood haunts, Valley Green 3. If River Vine is ever made into a movie, then it needs to be filmed there.

Through her blend of horror and fantasy Jean Lee has created a unique world of both wonder and danger, in which opponents really know one another – and that familiarity breeds genuine contempt. In the end, however, Fall Princeborn: Stolen understands the power of hope. None of the characters magically arrives at wholeness by the end of the story, but many are beginning to deal with the scars they bear. This isn’t a sit down and turn your brain off sort of novel – it leaves readers chewing the cud of their own past traumas, and has us dealing with question of trust. It’s well-worth the time to read.