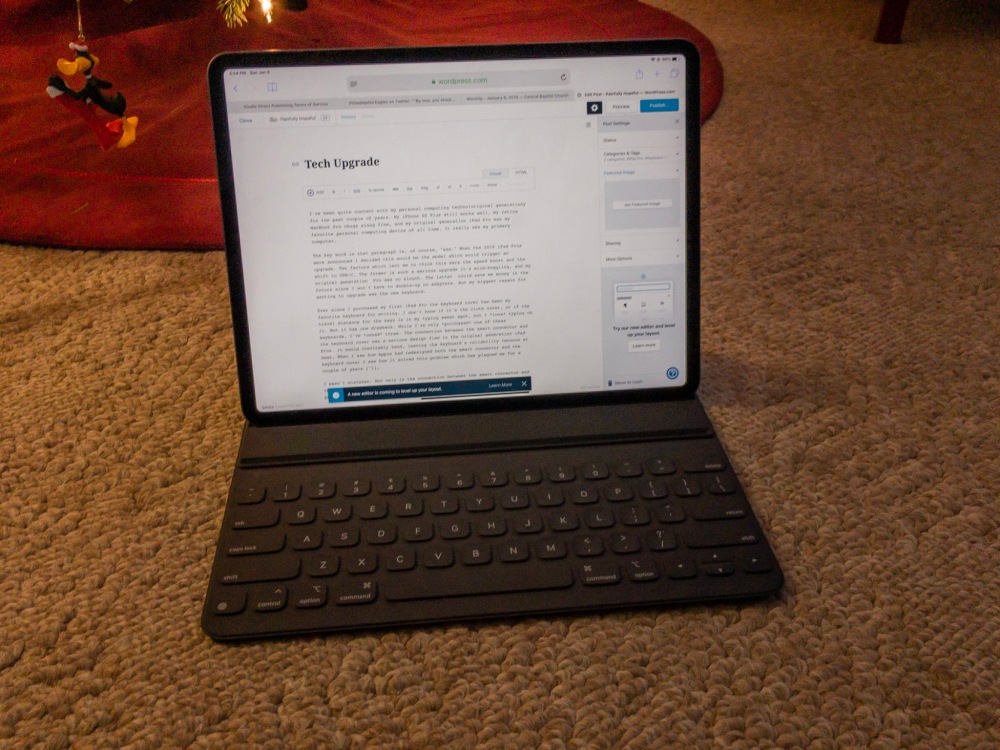 When Face ID was introduced on the iPhone X I was underwhelmed. One of the coolest aspects of Touch ID was that I didn’t need to pay attention to the phone in order to unlock it. Instead, I could reach down with a finger and the phone would be unlocked. I don’t like it when my devices demand attention, and that’s how I feel about Face ID on the iPhone. Even if it’s only for a moment, it’s still demanding I glance away from what I’m doing to get it open.

On the iPad, however, Face ID makes a lot of sense. When I wake up my iPad I’m doing it because I want to be paying attention to the device 1. And it doesn’t matter if I’m holding my iPad, have it set up on a table or a desk, or am holding it on my lap – when I tap the screen to wake it up Face ID activates and unlocks my iPad. It’s the way it should be.

The only shortcoming of Apple’s current desing the placement of the front facing camera. It’s still along the narrow side of the device, as though the iPad were most often used in portrait orientation. This means it’s a very easy for my hands to block the camera as the iPad wakes and attempts to unlock. This is something Apple needs to consider moving forward, though I do understand why they might have kept the front camera in it’s current location. There’s a trick in videography where if a person’s eyes remain on the same level to the camera as the lens, to read a teleprompter or respond to an interviewerer, then it will appear as though they are still looking into lens 2. For FaceTime, it’s current location can help create a greater sense of connection. In practical terms this rarely works, as people tend to do wild things with their devices when they are FaceTiming, but in theory it could work 3.

Still, Face ID on the iPad works. And it is fast.

The speed of the 2018 iPad Pro’s have been celebrated ever since the devices hit stores, but experiencing this speed is mind-blowing. My iPad Pro is the fastest computing device I own, by significant margins.

I’ve yet to attempt any video editing on this new device, though I hope to do so today 4. But I have thrown the most taxing application I own at the iPad, Civilization VI, and it changes my experience of the game.

Civ VI is not a game I would ever consider playing on my three year old MacBook Pro. I own Civilization Beyond Earth for the Mac, which is based on the Civilization V engine, and every time I played the game the computer sounded like a jet about to take off 5. Civ VI, on the other hand, played fine on my original generation iPad Pro – that says a lot about the effenciency of Apples’ chips. On the 2018 iPad Pro, however, the game goes from “Oh yes, I can run this. I’m just breathing a bit heavy” to “Oh, were you running an application? I hadn’t noticed.” Everything is sped up – opening the application, loading a game, and processing AI turns. This isn’t a watered down version of Civilization VI, mind you, it’s the full Desktop version, and my iPad doesn’t even get warm when running it. That’s impressive. I cannot wait to start doing some serious video editing on this thing!

When I first held the original 12.9 inch iPad Pro I was shocked by how well balanced the device was. Everything in my mind told me that the device should have been all but trying to fall out of my hand, because it was just so big, and yet I could hold it with no problems at all.

The 2018 iPad Pro, with the same size screen, is both physically smaller and balanced just as well as it’s predecessors. When I hold it in my hand, with or without the cover, it feels like a much smaller device than it actually is. The straight edges are right from the design language of the iPhone 4 & 5 series,. Those devices always felt comfortable to hold, and the 2018 iPad Pro benefits from this design as well. While the original generation iPad Pros never felt like they were fighting to get out of my hand, they did feel a bit slippery due to the rounded back. The straighter angles of the new design allow me to have a more firm grip. It’s well thought-out.

I’ve tended to use gesture controls on every iPad I’ve ever owned, so the lack of a home button isn’t a huge issue. There are times when I find myself double-clutching because of muscle memory 6, but I’m sure I’ll adapt. If you’re coming into this new design from a device which has a home button, and have never become accustomed to the iPad’s gesture controls, the learning curve will be higher but not insurmountable.

The device was round, so it rolled all over the place when not in use. There was no easy way to keep the Pencil connected to the iPad when not being used, which meant it had to be fished out whenever users wanted to put it into action. And it charged through the Lightning Port. So whenever the Pencil had be fed, there was a big stick hanging off a device most people carried about. Even worse, the charge port was protected by a nub which had no practical way to store while the Pencil was charging. Oops. Don’t misunderstand me, the original Apple Pencil is a marvel to use, but it’s design was way off.

The new Apple Pencil fixes everything wrong with its predecessor. It has a flat edge, so the Pencil no longer rolls way. It’s charged inductively, meaning there’s no nub to loose and no need to plug it into a port. And when not in use it hangs out in it’s charging position without a care in the world. For the first two days I owned my new iPad the Pencil was always attached to the device, and I didn’t worry about it one bit. The Apple Pencil went from a design headache to design wonder. Before it felt like a puzzle piece which completed the iPad Pro’s functionality, but without fitting into the picture. Now the Apple Pencil feels like an actual extension of the device. It’s well-done, and should have been done that way from the start.

Is it worth it?

It may seem odd after my glowing review, but if Apple had not redesigned the keyboard cover I may have waited another iteration to upgrade. My original generation Pro is still a great device and I didn’t find it constraining. It might sound dumb to bank so much on a keyboard, but because my iPad is my writing studio the keyboard is that important to me. But even though I may have waited, I would have wanted to upgrade.

The 2018 iPad hits in just about every area. The front facing camera should be moved, and iOS really needs to allow external drive support, but this may be the best vision of tablet computing that’s ever been brought to market. It’s fast, offers new possibilities with the migration to USB-C 7, and is stunning to hold and use.