In late September one of our neighbors shared a trick or treating story, featuring her eldest son, on a local Facebook group. Though, unlike most parental trick or treating stories, this tale didn’t fill readers with warm fuzzies. Instead, it flooded readers with both sorrow and compassion. Leigh’s son, you see, is on the autistic spectrum — which can present a distinct set of challenges for parents determined to give their children all the typical childhood experiences. And in 2018 those challenges led to a heartbreaking moment, best left to Leigh’s own words,

Because of my son’s diagnosis, he sometimes has difficulty waiting. He loves candy, but can also be kind of picky. Last year, he was able to get a hand free to pull a candy bowl that a neighbor was holding towards him just to get a closer look at what was inside. My husband quickly intervened and apologized to the neighbor, explaining that our son had Autism. The man not only angrily snatched the candy from my son, but slammed the door on us. I still have not forgotten the look on his face almost a full year later. Our Doodles began to engage in self injurious behavior, hitting himself repeatedly and flopping to the ground. It was a very long walk home after that. We were exhausted – physically and emotionally, cutting short Halloween for our other neurotypical son.

A lot of posts like that often devolve into an angry rant, but Leigh didn’t post on Facebook to attack a neighbor who lacked empathy. Instead, she reached out to our town’s facebook group to see if anyone would be interested in putting a “We Get It” flyer in their window. This way, people who are trick or treating with folks who have special needs know they’ll be met with patience, understanding, and love. The response was a whole-hearted, “Yes!” It was wonderful to see.

I wanted to help Leigh make her vision a reality, so I offered to design the flyers, and format whatever guidelines she felt were appropriate. But I also asked her if she’d considered making a lawn sign so the announcement would be more visible on Halloween night. She said she had, but the cost of printing the signs steered her away from pursing it so she opted for the flyers 1. I told her I’d see what I could do about getting some signs printed, and designed the first iterations of both the flyer and the sign that very night. With Leigh’s input 2, we came up with something which communicated the hospitality she wanted to convey.

The next morning I found a good deal on the printing, and another good deal for lawn sign stands on Amazon. Using this information I shared the near-finalized lawn sign with my church council and asked if we might foot the bill for printing 100 signs for our town. The council replied with a unanimous, “Yes!”

Excited, I shared an image of the finalized sign with the same Facebook group on which Leigh had first recounted her story. The response was overwhelming. Not only were people giving their addresses, requesting a sign 3, people from other towns were asking if they could get the file so they could print up their own signs. This blew my mind.

That afternoon I exported out a PDF of the lawn sign, but left of our #PalmyraGetsIt hashtag. This way the other towns could insert a hashtag which matched their location. As far as I know, people in five towns around here have asked for the file and printed signs. I also know of one town in central New Jersey that’s printing some. In addition to these locations, another local business is printing another 100 signs for Palmyra! What a simple and wonderful way to offer hospitality to folks who have reason to worry they may not be welcome!

Even better, the signs aren’t just for those on the autistic spectrum. Rather, they are a signal for all those who have special needs which may make trick or treating difficult. Because, “We Get It.”

And I want to make these files available to anyone who would like to print up signs or flyers of your own. I offer these with only one stipulation. The message on the sign is the only message on the sign. No logos or other images should be placed on them. Central Baptist didn’t do this, neither should anyone else.

I am thrilled to be part of Leigh’s story, and excited that so many people are jumping on board. It’s amazing, and if you’d like to hop on this train please do! After all, the whole point of “We Get It” is there’s room for everyone. Happy Halloween! 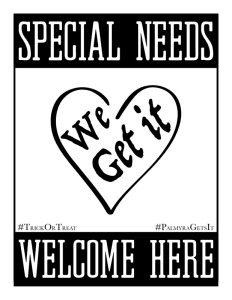