It was a long Independence Day, and this introvert is socialized out. So I’ll share a single image from Riverton’s 4th of July celebrations, and then curl up and go to bed after I schedule this to go live in the morning.

There is a great deal of odd stuff which goes on in Riverton on the 4th. Much of it is fun, some of it can be a bit alarming. Actually, a great deal of the goings on are both fun and alarming, but it rather adds to the charm. 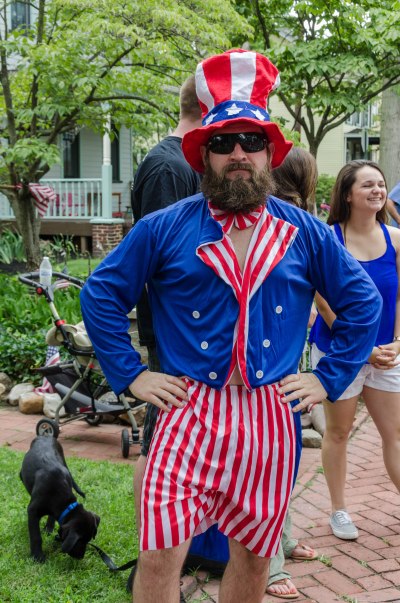 And then there is the guy I can only refer to as “Hipster Sam.” I believe I’ve gotten a photo of him previously, but as I was making my way over to the locale where I would later lead the invocation I came across him once again. I held up my camera, caught his eye, and said, “I really have no choice but to take your picture.” He smiled, unburdened himself of a few things, properly fixed his outfit, and struck this pose. “Hipster Sam” is a great image of what a truly unique and bizarre celebration Riverton hosts on July 4th each year. A lot of towns are giving up big celebrations like this one, I’m very glad Riverton is not.