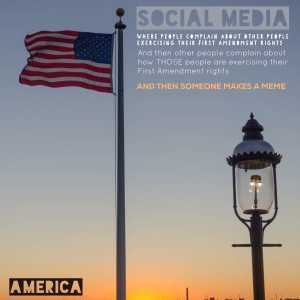 Last week, Colin Kaepernick, after struggling publicly with the plight black Americans for some time, decided his conscience required him to make a stand. So he remained seated during the playing of the National Anthem during a 49ers preseason game.

First, as the name of that end of the political spectrum implies, people with a more reactionary bent quickly took to social media to condemn his “shameful” behavior. Kaepernick, the reasoning went, had insulted everyone who currently serves America and fights for our freedom. Pejoratives were tossed out like chum to sharks, and the pile-on began.

“He’s making this about himself!”

“He makes millions of dollars, how could he disrespect the country that way?”

The San Francisco Police Officers Association even demanded an apology.

But, as is often the case in bi-polar social media land, people from the Radical end of the political spectrum got wind of Kaepernick’s actions. Even more importantly, it seems, folks from this end of the spectrum got wind of the Reactionary response to the protest. Well, that couldn’t be allowed to stand — those people had to be shamed into shutting up.

It’s almost as if the First Amendment is great, when people use it the way we want it to be used. If this is the case what we have is not freedom of expression, but freedom to join two distinct mobs shouting demands we express our “free expression” in ways which conform to their worldview — or suffer their wrath if we don’t.

For my own part, I feel the need to tip my cap toward Colin Kaepernick in respect. He felt convicted to highlight a system of injustice and, as a person who is privileged, felt he couldn’t be silent. He sat down. When asked why he remained seated, he gave his reasons. What he did was the very definition of a First Amendment free expression. One doesn’t have to agree with his act of protest 1. In fact, people must be free to disagree with him if the right of free speech is to continue as a cornerstone of our public discourse 2.

But, by way of critiquing both the Reactionaries and Radicals who are alternately condemning and defending Colin Kaepernick’s protest, let’s highlight what he actually did.

What he did not do is run around the field condemning anyone who had the conviction stand as the anthem played. He didn’t denounce his teammates who stood as racists, or disrupt the proceedings by trying to drown out the rendition with shouts of “Shut it down! Shut it down!” Instead, he gave his reasons why he no longer felt comfortable standing. He expressed himself freely, and afforded others the opportunity to do the same — which is the only way the First Amendment can actually work. Because I do believe people have the right to express themselves freely, and even say incredibly stupid and unintentionally ironic things, I have decided to leave people to their trenches and start my own thing — #teamheadache.