On Friday a friend of mine and I decided to hop on Portland’s excellent light rail and explore the Pioneer District of downtown. We opted not to seek out specific sites, like Powell’s Books, deciding instead to wander the streets and see what life we could find.

Portland is a stunning city, and a pleasure to walk through. While it is a major population center, downtown feels close. It’s energy is more akin to a small town than a metropolitan center and I quite enjoyed the vibe. After picking up some local-roasted coffee, we wandered the streets. Of course, I had my camera.

I tend to angle my head upward when I’m in a new environment and on a photowalk. I find the ambiance at tree level and above to speak a great deal about the culture of a place. My friend on the other hand, tends to look at ground level, and so he discovered something I would have stepped over without a second glance 1.

Embedded in a brick sidewalk were a number of granite blocks, each engraved with a provocative saying. Several captured my interest, but perhaps none more so than the one depicted in the image below.

Unhappy is the land that needs heroes. 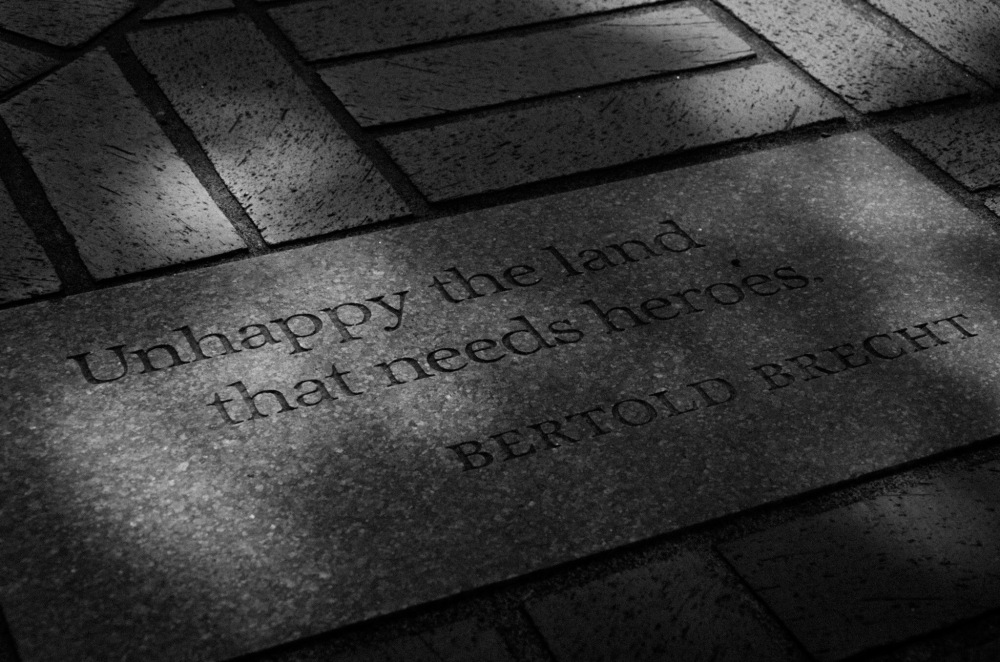 This quote, by Bertold Brecht, fascinated me because I can interpret it in different ways.

First, and perhaps the most common people absorb the message, is to read the quote as a lament over the lack of heroes. In this reading great deeds need to be done, and the “land” mourns because no one rises up to accomplish them. This is the interpretation from which Super Heroes spring into our cultural imagination.

The second interpretation is also a lament. But this lament is not about the lack of heroes, but that they are needed at all. A land which needs heroes is a land in which the bulk of a populace has abrogated their responsibilities for the well being of the community. In this land ordinary things need doing — like helping a neighbor adjust to parenthood, stopping a wayward dog before it runs out into traffic, or shoveling a neighbor’s driveway. But instead of doing them people say, “That’s none of my buisness” or “I don’t have time for that.” When being a good neighbor becomes seen as a heroic move “above and beyond,” it’s a sign of sickly relationships.

I love super hero movies, and remain fascinated by comic books even as an adult. But I’d much rather have a community of neighbors than an unhappy land of heroes in which people say, “You do that. We don’t want to.”