I’ve live in the Central Baptist’s parsonage for fourteen years, which is the longest I’ve lived anywhere my entire life 1. Our longevity here has meant certain points of life have become traditions, such as waking up and finding a spot to enjoy Riverton’s Independence Day Parade. It’s the biggest parade in the area, and has been going on forever, so it’s fun to head down and catch up with some folks. As a photographer, however, it poses a bit of a challenge.

There isn’t a huge amount of variation from year to year.

That isn’t it say the parade isn’t enjoyable, it is. But I don’t need 156 photos of the same firetruck over the course of a decade in my Lightroom library.

So this year I decided to take a different tack on photographing the parade. Rather than full objects, I’d focus on elements of the different floats and trucks as they passed by. To that end, I opted to use my 55-300mm lens for the duration.

This changed my entire experience of the parade.

Instead of “just another firetruck,” I located dedications to fire fighters who’d died in the line of duty. Instead of “another band on a float,” I saw people enjoying themselves. Instead of “yet one more classic car,” I saw a daughter excited to be riding one her father’s lap while everyone waved and cheered.

The photo below is my favorite of these character shots. Delran’s Captain’s helmet is on the dashboard of the firetruck, sitting next to Animal. I love the Muppets! 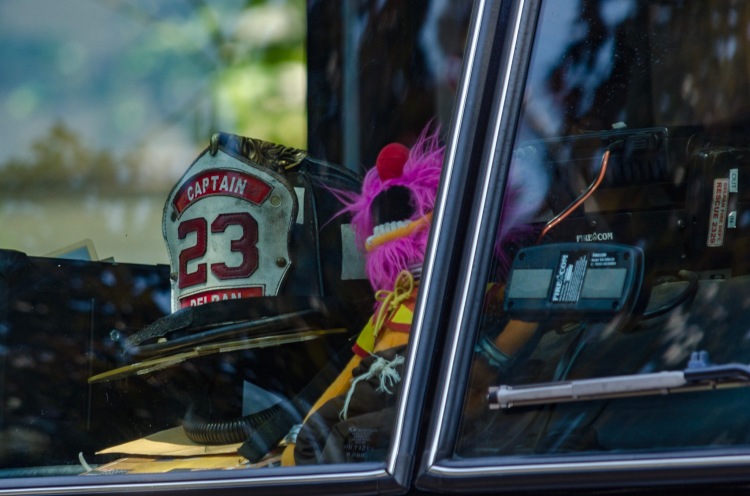 These are the details which give character to each individual entry to the parade, and I’d been missing them for nearly a decade and a half. My experience with these photos led me consider what is dynamic about the parade, the crowd. The crowd shifts from year to year as attendance expands and contracts, children age, and friends move away. Certain homes along the route always have a party going on, but even these evolve from year to year to year. Thanks to my interactions with some of my readers, I’m encouraged to try my hand at street photography — the Riverton Parade might be the best opportunity I have. Too bad it’s a year away!

View all posts by wezlo