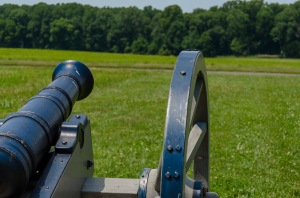 I grew up in a little town called Oreland — which is part of Springfield Township in Montgomery County, PA. Having a mother who was a history major, I grew up with a general awareness of my childhood home’s role in the Revolutionary War. I knew Springfield was mostly made up of a valley created by three main hills: Camp Hill, Militia Hill, and Chestnut Hill. I knew George Washington once had a headquarters within bicycle distance of my childhood home, and how several of our favorite haunts had been standing when both Continental and British forces passed by in 1777. While no major engagements were fought in my part of Oreland, the Battle of Germantown and the skirmishes in Whitemarsh were so close they were considered “our” part of the history.

What I never knew was the over all story of the Philadelphia Campaign. That is, I knew the events but not how they were all connected. For someone like me this was an inexcusable omission, and I moved to rectify the situation.

Earlier in the year I read a book on the Battle of Brandywine, which covered much of the first part of the campaign 1, but I still wanted to read about the part of tale which passed through my childhood home. This desire led me to pick up the second volume of Thomas J. McGuire’s excellent The Philadelphia Campaign. This book covers the story as it passed both though and around my hometown, and tells a tale which saw a “beautiful orchard” turned into a wasteland. Two massive armies not only destroyed much property, but bled the land dry of all it’s natural abundance in order to support their existence. That neither side robbed the land maliciously only further highlights one of the greatest horrors of war.

Reading the narrative of troop movements, skirmishes, and all-out battles as they passed through my childhood stomping grounds was a surreal experience. Even the provided maps seemed like something from another universe. Troops moved toward Germantown taking the Limekiln Road 2, the Bethlehem Road 3, and the Ridge Road 4. These are roads with which I am very familiar. A counter push by the British caught the Continental line almost by surprise at Edge Hill and followed Edge Hill Road, on which I used to drive nearly every day. During the Battle of Germantown the Wissahickon Gorge played a sizable role in the fight. We used to call this place “Valley Green” after the Valley Green Inn — and it was our favorite spot for hiking and feeding the ducks when we were kids.

Reading the stories and seeing the maps not only gave me a timeline to connect the local lore with which I grew up. It solidified in my mind a war had been fought where people now live, work, and play. I tried to imagine my region bled dry and burned out, and simply could not picture the ravages the second half of the Philadelphia campaign waged on my childhood home. When I think of the devastation described, and see those depictions played out in living memory from wars currently being waged all through out the world, I can only hope for and pursue shalom. When I imagine both the stability and prosperity of where I grew up 5,I hold out hope the carnage of war can be washed away. And, after much grieving and hard work, life can again take hold over death.