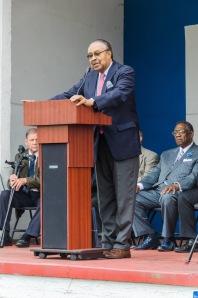 I am a lover of history. So I was overjoyed when I found out Palmyra was inviting a living piece of history to come and be honored by our community.

Dr. Clarence B. Jones is scholar and civil rights worker who is perhaps best known as an advisor, personal attorney, and speech writer for Dr. Martin Luther King Jr. He authored, in fact, one of the most well-known portions of the iconic “I Have a Dream” speech 1.

It is obvious today that America has defaulted on this promissory note insofar as her citizens of color are concerned. Instead of honoring this sacred obligation, America has given the Negro people a bad check, a check which has come back marked “insufficient funds.” But we refuse to believe that the bank of justice is bankrupt. We refuse to believe that there are insufficient funds in the great vaults of opportunity of this nation. So we have come to cash this check — a check that will give us upon demand the riches of freedom and the security of justice.

What makes Dr. Jones so important to our community is his status as an alumnus of Palmyra High School, graduating as Valedictorian of the class of 1949. The town invited him back to honor his legacy, and thank him for his life long pursuit of justice. To this end our High School renamed our library to bear his name. The school is also establishing an institute, also bearing his name, for social advocacy. Tuesday afternoon and evening I was able to attend the events focused on these two endeavors, it was an incredible day.

I didn’t get to speak with Dr. Jones on Tuesday. For me, it was enough to have heard his story and received his wisdom. On Wednesday, however, I was honored to meet his acquaintance.

I must confess, I was history-nerding out. I joined several other clergy members, Dr. Jones, his wonderful wife, our mayor, and other town officials in a conference room for donuts and conversation 2. As Dr. Jones sat at the table and spoke with another pastor I stood by the wall, completely awed. I was invited by Dr. Jones’ wife to sit, and I found I couldn’t. The table was occupied by a man who’d spent his entire life in pursuit of justice, a pursuit which sprang from his deep faith, and I couldn’t presume to take a seat at that table 3.

“I do this all the time,” his wife said.

On our way out the door the mayor looked at the assembled clergy and said, “And I want you all to share some remarks too, OK?”

Now, one thing from which I do not suffer is stage fright. When there is a crowd I’d much rather be in the front, speaking about something for which I have a passion, than among the crowd 4. But the moment the mayor made that assertion I, along with my fellow clergy members, I was suddenly little more than a deer in headlights. Dr. Jones wrote speeches for Dr. Martin Luther King Jr. 5, and I was going to offer a few remarks?

At this point my nerd-out had become acute. I was shaking with excitement. Then, when we ascended the steps, I found myself sitting next to our guest of honor. I attempted to look dignified 6, but when it came time for me to rise and make my remarks my innate social awkwardness took over. I raised my camera to my eye and said, “I just need to prove I was up here” as I took a photograph of the crowd.


I never got over my nerd-out during the event. After the ceremony I handed my camera to a friend and had my picture taken with Dr. Jones. This photo will never been seen in public, as I look like a twelve-year-old boy band fan who is getting to meet the members in person 7. It was just so cool.

I’m not sure I’ve met a man more gracious and kind than Dr. Jones. He was funny, direct, and was touched by the honors our little town had bestowed upon him. “Thank you, thank you, thank you,” was how he ended most of his remarks. Meeting him, and embracing both his story and wisdom, was amazing. Being able to stand with Dr. Clarence B. Jones, and take part in a ceremony to honor his wonderful service, is one of the highlights of my life.