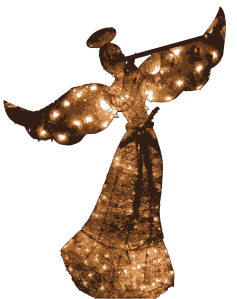 My winter angel photograph is one of my favorite images from 2017. I love the unearthly feel of the photo, and appreciate how it maintains a welcoming feel even in its otherworldliness. The photo pleased me so much I decided to see if I could edit it into a version which would be suitable adorn the cover of Central’s Christmas Eve worship bulletin.

The first step of the process was to mask out the background. I could have done this Photoshop, but I wanted to explore some of Luminar 2018’s masking features instead. So I created a separate adjustment layer and drew a mask around the light angel. I then set the blend mode to “color burn,” which erased all but the field of lights which surrounds the figure. Again, I could have decided to erase the background in Photoshop, but I wanted to play around a bit and have some fun.

I exported the “angel plus stars” image to a PNG and then opened it up in a nifty Mac App called “Super Vectorizer,” which processed the bitmap image and converted it to a scalable vector graphic. I opened the resulting file in Autodesk Graphic 1 In order to work edit the image.

The first pass at vectorizing the image resulted in an all black background layer, which I expected. As I wanted the angel in isolation, the first step I took in editing was to delete this all black layer. This led to my first problem, the black background was being used to fill in some of the lighted angel’s dark areas. Deleting the background created gaps in the image, and in some key areas – the angel’s belt, trumpet, and wing tips all disappeared! To rectify this issue I used the pen tool to draw paths in the areas affected, and adjusted their curves to fill in the gaps. The resulting shapes were arranged behind the other layers, re-creating the fill effect formerly handled by the background layer.

After the gaps were filled the angel looked fantastic, but there was one more issue – the dots of the background lights were still visible. Because of the way Super Vectorizer creates images, I couldn’t just select the offending points en masse and delete them. Instead, if I wanted to use Graphic for the rest of the process, I would have had to delete the points one at a time. Needless to say I was not thrilled with the prospect.

Changing gears, I exported the file to a PNG 2 and saved it on my desktop. After grabbing my iPad Pro and Pencil I opened the new PNG in Affinity Photo and used the eraser tool 3 to remove the unwanted shapes. Once I was finished, I saved the photo back to my Desktop folder using iOS 11’s Files app. From that point I processed the image through Super Vectorizer a second time, yielding a vector image of the angel in isolation.

Finally, I again opened up the resulting SVG in Autodesk Graphic. This time I deleted some unwanted color casts which had crept into the vectorizing process, and deleted a few stray points I’d missed during my erasing step. Once I was finished I exported the angel as both an SVG and PNG – ready to be used on the bulletin cover!

I’ve included the PNG of the angel in this post, but if you’d like to see the vector image for yourselves, feel free to grab it from open clip art.